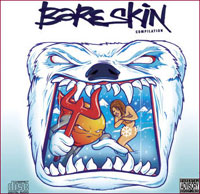 This was a compilation album put together by HipHopHotSpot.Com to deliver incredible hip hop music to hungry fans world wide and to extend the reach of these talented artists to more global fans. The music is hot hip hop no doubt. Check it.

Review Highlights (from media and other sources):

“Another thick HHS compilation that will satisfy your unhealthy desires for dope hip-hop. “Title Track” will melt your freaking ears.” – AddReviews

“HipHopHotSpot.com, the hip-hop entity behind other independent cornucopias, such as the Aberfoyle Springs Volumes 1 and 2, presents the “Bare Skin Compilation,” an eclectic mix of the best that underground hip-hop has to offer – packaged neatly into an almost too-plain wrapper just waiting to be torn open and devoured by the masses of indy hip-hop heads with an appetite for brazen and uninhibited underground fun.”

“All of the usual underground dishes are here, as 7L & Esoteric continue to showcase their talents on the Jon Doe-produced “Title Track,” and the low-key flute-driven production of Celph Titled on “Guerilla Orchestra” proves again why Apathy may be the next big thing to drop into the lives of hip-hop addicts. But the dinner party does not stop there, as a whole slew of virtual no-names on the hip-hop scene stop through to bare a little skin of their own.” – Christopher “Scav” Yuscavage

“Most wouldn’t think that a great compilation would start out with a song called “The Story Ends”—odd and ironic way to begin a collection of great hip-hop. But iCON the Mic King land and land hard featuring the talent of Godamus Rhyme and proceed to doom and gloom us. And if you’re like me and get really sick of hip-hop and their preference to put disses or skits in between the real music you’ll be pleased to find that none of that nonsense is on here. Track standouts include Jon Doe featuring C. Rayz Walz, Angle, Prophetix, Pip Skid, and Timoty Brindle. And who could leave out the exclusive cut by Celph Titled? Hard-hitting and thunderous beats complement the MCing nicely.” – J-Sin

“This was one of those CDs where you only know about half the featured artists. None the less, this was one of the best flowing comps I’ve heard in a minute. With cuts featuring Lodeck, C-Rayz Walz, John Doe, Celph Titled, Apathy, you know it has potential.”